Tsowa Safari Island is home to some of the hugest baobab trees (Adansonia Digitata) in Africa.  These trees are magnificent specimens of nature and live for thousands of years and can reach a girth of 10 meters!

The baobab is undoubtedly one of the most frequently discussed botanical phenomenons in Africa and compliments the most dramatic landscapes Africa has to offer. The origin of the name baobab is to be found in the Egyptian name ‘Bu Hobab’’ given to it by Cairo merchants who traded in exotic products during the 16th century. There is much more to the baobab tree than its physical appearance, properties and mystical qualities. It is also the inspiration behind several myths and stories.

• It provides shelter and food for humans and animals alike.

• The leaves of the baobab can be used as a leaf vegetable in a salad or cooked like spinach.

• The fruit is a super food with fourteen essential vitamins and minerals and has one of the highest antioxidant capacities of any fruit in the world, giving it an amazing range of  health benefits.

RECIPES:
There are many delicious nutritional recipes to be found incorporating baobab powder.

Refreshing Baobab and Tumeric pick me up:

METHOD
Add all ingredients, except baobab, to a small pan and warm over medium heat until nearly simmering, whisking to combine.
Remove from heat, whisk in the baobab and pour into a mug or glass jar to serve.

Young trees are difficult to recognise as they have simple leaves. This has given rise to the Bushmen believing that there are no young baobabs and that fully developed specimens are flung from paradise. Being top heavy, they land with their roots in the air. This is supported by their claims that the thuds of falling baobabs are clearly audible rom time to time. (Ref: Field guide to Trees of the Okavango Delta – Veronica Roodt).

The flowers are creamy and light up at night only lasting 24 – 28 hours. The Bushmen believed that any person who plucks the flowers will be torn apart by lions, because there are spirits in the flowers. They also believed that if you drink the water in which pips from the baobab fruit were soaked, you will become mighty and be protected from crocodiles.

One African legend has it that the first baobab grew next to a small lake. Taller and taller it grew until it started noticing the other trees. Some were tall and slender, some had brightly coloured flowers and other others had large leaves.

Then one day it saw a reflection of itself in the lake which shocked it to its root hairs: There in the mirror of the lake it saw a huge fat trunk covered in bark that looked like the wrinkled hide of an old elephant; small, tiny leaves and pale, creamy flowers.

Very upset, the baobab complained bitterly to the Creator. ‘Why did you make me so ugly?’ it wanted to know. ‘Why couldn’t you make me elegant like the palm tree with its straight and slender trunk? Why did you have to make me so big and fat?’ the baobab protested. ‘Look at the masses of bright and beautiful flowers of the flame tree! What about me? Why couldn’t you give me flowers like that?’

On and on the baobab went, wailing and bemoaning the bad deal it had been given. When it spotted the fruit on the fig trees, its indignation knew no bounds. God was becoming more and more exasperated with the wailing and complaining of the baobab until eventually, determined to silence the baobab forever, he came down, yanked it out of the earth and replanted it upside down.

From that day on the baobab could no longer see its reflection or complain. Since then, it has been working in silence, paying off its ancient transgression by being the most useful and helpful tree around.

Legends abound as to why the tree looks like it has been stuck upside down into the ground. One story goes that the god Thora did not like the baobab growing in his garden, so he plucked it out and threw it out over the wall of Paradise. It fell on the Earth below, landing upside down and simply continued to grow.

Another story goes that when the baobab was planted by God, it kept walking, so God pulled it up and replanted it upside down to stop it moving.

A third story holds that when God was planting trees on earth, he asked the animals to help him and gave every animal a tree to plant. The hyena was given the baobab, but was so disgusted by the tree, it simply shoved it in the ground upside down. 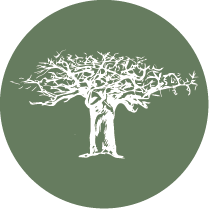